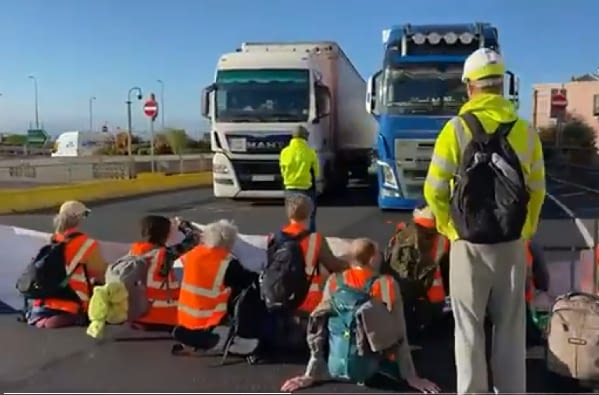 Insulate Britain have once again blocked a busy roundabout on the M25 causing chaos.

Kent police arrested 11 activists who were blocking Junction 3 of the M25 at the Swanley Interchange.

Kent police wrote on Twitter, “We are currently in attendance at J3 of the M25 (Swanley Interchange) due to a group of protesters blocking the roundabout.

“Please expect delays and find alternative routes if possible whilst we work with @HighwaysSEAST to remove the protesters and reopen the roundabout.”

At 8.53am, Kent Police said 11 people were arrested and the roundabout had been reopened.

They tweeted, “The Swanley Interchange roundabout at J3 of the M25 has now reopened following an earlier protest, which has resulted in us arresting 11 people.

“Delays remain in the area whilst the backlog of traffic clears. Thank you for your patience.”

A spokesman for Insulate Britain said, “We are going nowhere.

“You can raid our savings.

“You can confiscate our property.

“You can deny us our liberty and put us behind bars.

“But shooting the messenger can never destroy the message that this country is going to hell unless you take emergency action to stop putting carbon into the air.”

The campaign has been running for three weeks, which has seen over 400 arrests, according to Insulate Britain.

On 23 September a High Court injunction came into force banning protestors to block the M25, if found guilty the protestors could face prison.