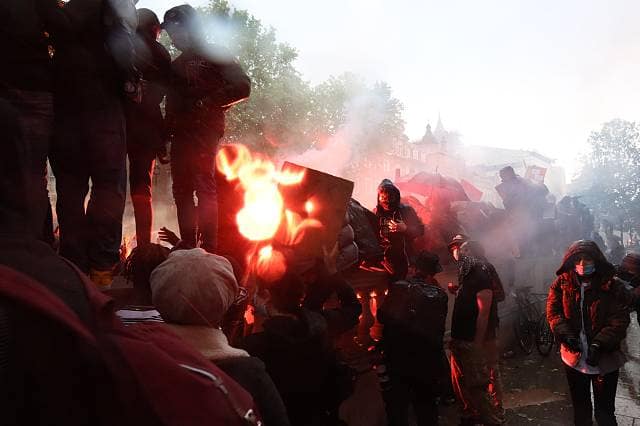 Scotland Yard has imposed a strict 5pm curfew on protestors in London, and have warned police will be making arrests.

The Democratic Football Lads Alliance (DFLA) are rallying “football lads, patriots, veterans and people who just love their country,” to protect statues and monuments in London.

Imarn Ayton who is a senior Black Lives Matter (BLM) organiser has called for Sir Winston Churchill’s statue to removed and placed in a museum.

She has told BLM protestors to stay away from London for fear they are under threat of violence from far-right groups.

Ayton was sked if she believes Sir Winston Churchill statue should be removed, she told BBC Radio 4, “Yes I do. I believe these statues should be moved to a museum I think it’s a win win for everyone.

“It no longer offends the black nation, but we get to keep our history and keep those that would like to see that.

Ayton was then asked, why Churchill’s statue was offensive, she added, “Any statue of people who has spoken negatively towards black people is going to be offensive. Any man.”

Boris Johnson has hit out and said this is totally “absurd and shameful” that Churchill’s statue is “at risk of attack.”

Mayor of London Sadiq Khan told Radio 4’s Today programme on Saturday, “We have intelligence that extreme far right groups are coming to London, they say to protect the statues but we think these statues could become a flash point for violence.

“And we are worried in far-right groups getting involved in violence, vandalism and disorder with those protesting as part of the BLM movement.

“And that’s one of the reasons why I’m asking people to stay away from central London.”

Despite pleas from the Prime Minister to stay away over fears of coronavirus rapidly spreading, the Met Police are bracing for large crowds to take to the streets in London.

Nick Knowles, from Hope Not Hate, this morning told BBC Today, “If you look whose planning to come into London today, you have seasoned football hooligans… BNP protesters.

“You have some who are concerned about statues, but others who are looking for a fight and have openly said this on their social media channels.”