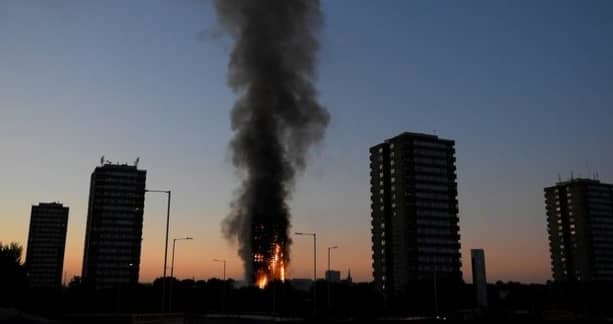 Hundreds of people were inside the building

The 27-storey Grenfell Tower in west London was completely destroyed by fire over night with 30 people taken to hospital. There have been a number of fatalities but the exact number is not known yet.

The blaze, which broke out at 1am, engulfed the whole building at a time when hundreds of people were inside.

Paul Munakr, who lives on the seventh floor, managed to escape.

“As I was going down the stairs, there were firefighters, truly amazing firefighters that were actually going upstairs, to the fire, trying to get as many people out the building as possible,” he told the BBC.

He said he was alerted to the fire not by fire alarms but by people on the street below, shouting “don’t jump, don’t jump”.

“Now, honestly I don’t know for certain if people jumped off the building to get away from the fire, but the main thing for me with this incident is the fact that the fire alarms didn’t go off in the building,” he said.

“This is a large and very serious incident and we have deployed numerous resources and specialist appliances.”