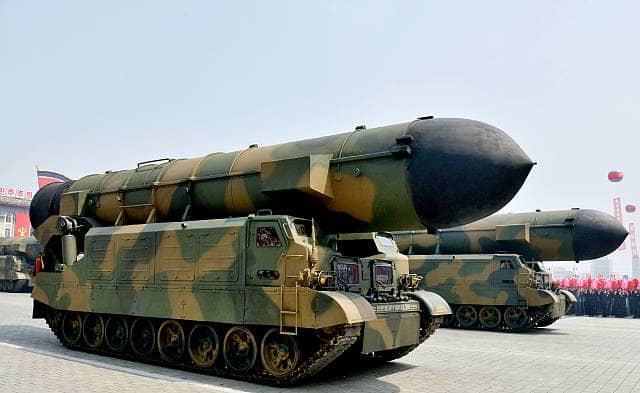 North Korea is to continue testing their missiles despite international condemnation after US Vice President Mike Pence earlier said the US’s “era of strategic patience is over.”

Ryol said an “all-out war” will happen if the US are “reckless enough to use military means.”

Tensions are on a knife edge with China being seriously concerned about what will happen between the two nations.

Beijing ordered 150,000 troops to the North Korean border last week for humanitarian and refugee reasons along with medical facilities in case war does break out.

Pence who arrived in the region Sunday spoke Monday from South Korea and said: He said that the threat of North Korea to use any of their nuclear weapons would be met by “overwhelming and effective response.”

“Just in the past two weeks, the world witnessed the strength and resolve of our new president in actions taken in Syria and Afghanistan.”

“North Korea would do well not to test his [Trump] resolve or the strength of the armed forces of the United States in this region.”

Kim In-ryong North Korea’s ambassador said Monday in a news conference that he condemns the US missile strike in Syria.

He continued by saying that the US are “disturbing global peace and stability and insisting on the gangster-like logic that its invasion of a sovereign state is decisive and just and proportionate and contributes to defending the international order.”

Lu Lang the Chinese foreign ministry spokesman said to reporters Monday that the Korean peninsula is “highly sensitive, complicated and high risk” and all sides must “avoid taking provocative actions that pour oil on the fire.”

However, Sergei Lavrov Russia’s foreign minister said Moscow will not tolerate “missile adventures by Pyongyang.” He added that any strike by the US would be “a very risky course.”

Shinzo Abe the Japanese prime minister said Monday that diplomatic efforts are “important to maintain peace,” however, “dialogue for the sake of having dialogue is meaningless.”