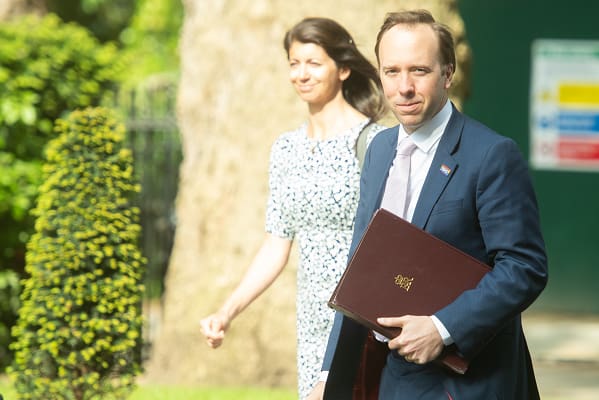 On Saturday Matt Hancock announced his resignation as Health Secretary following the Sun exposing him snogging an aide in his office.

A day after the Sun broke the news exposing Hancock of his affair, he quit.

The Prime Minister said that he was “sorry” Hancock has resigned and said he “should leave office very proud of what you have achieved, not just in tackling the pandemic, but even before COVID-19 struck us.”

He added, “I am grateful for your support and believe that your contribution to public service is far from over.”

The Labour leader, Sir Keir Starmer said he welcomes his resignation and then criticised Boris Johnson for not sacking him.

Sir Keir tweeted, “Matt Hancock is right to resign. But Boris Johnson should have sacked him.”

Conservative MP Dehenna Davison tweeted, “A tough decision, but the right one. Matt has worked his socks off as Health Secretary, and I’ll always be especially grateful to him for the role he played in helping us beat Covid.

“Let’s come together to finish the job.”

But Jonathan Ashworth, Labour’s shadow health secretary said, “It is right that Matt Hancock has resigned.

“But why didn’t Boris Johnson have the guts to sack him and why did he say the matter was closed?

“Boris Johnson has demonstrated that he has none of the leadership qualities required of a Prime Minister.

Labour chair Anneliese Dodds said, “A Health Secretary who behaved like rules didn’t apply to him. A Prime Minister who didn’t have the guts to remove him. A government riddled with sleaze.

“Now Matt Hancock has gone, the Prime Minister must clean up this crony government.”