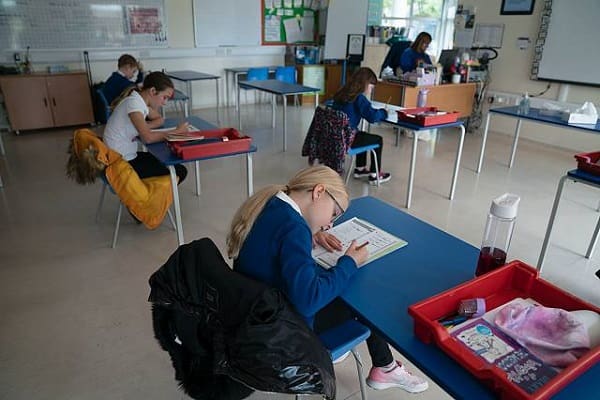 Narrow down your search to find the best co-independent school for your child.

Parents across the UK set out on the mission to find the right boarding school for their child every year. But there are many excellent schools to choose between. Navigating the countless options can be overwhelming, and finally deciding which school would be the best fit for your child is challenging to say the least. That’s why we’ve broken down six of the highest-performing schools, covering all corners of England. These schools are the best of the best; they combine heritage with future-proofed educations and offer the community-driven learning approaches that help children to thrive and develop into rounded young people, before progressing onto ambitious academic and creative careers.

First up, Repton School is one of the most prestigious schools in the UK. Not only is Repton rich with literary history, but the school also offers outstanding academic tuition and unrivalled sports coaching.

Repton School and Repton Prep make up one of England’s leading co-educational boarding and day schools. In 2020, they combined to become a through-school for students aged 3-18. Based on the site of a 12th century Augustinian Priory in Derbyshire’s rural Repton, the two share a close relationship, legacy, and a wealth of awards. Together, the schools house over 1,000 students, large enough to enjoy an expansive community feel, yet small enough that each student can flourish independently. While boarders experience the full-boarding education, Repton also provides a flexible approach for day students. The inclusive House structure accommodates both in its vibrant curricular and extracurricular programmes. The school is committed to helping students excel in and out of the classroom as they develop into broad-minded adults.

Founded in 1557, some of Repton’s original buildings still exist on the site today, though the school now boasts modern facility suites, too. This combination of the historical and the forward-facing echoes Repton’s blend of traditional curricular subjects and modern, creative subjects. The school’s newest state-of-the-art facilities include a Science Priory with an observatory and lecture theatre with a 3D screen; a Music School with practice rooms, recording studio, and performance areas; the 400 Hall Theatre with a 315 seater multi-million-pound theatre, state-of-the-art lighting and technical equipment, as well as its own entertaining area; and an Art School with ceramics and photography workshops and two gallery spaces. Repton is widely praised for combining heritage and traditional subjects with world-class facilities, forward-thinking teaching, and extensive pastoral care.

During Repton’s 2020 ISI inspection, the school was judged ‘excellent’ in every area, which shows in the school’s outstanding exam successes. This year, 70.5 percent of iGCSE/GCSE grades were a 9-7, and 27 percent were a 9. Meanwhile, 54.8 percent of A Level students achieved A*-A grades and 22.8 percent achieved an A*. Almost all A Level students have progressed on to study at university – both locally and internationally – and six have secured places at Oxbridge.

Sport is also a major part of Repton’s curricular and extracurricular programmes. With over 25 sports on offer, Repton helps to cultivate and hone each student’s sporting potential. The school’s team successes are also noteworthy; Repton’s hockey team has won more national titles than any other school, boasting 41 successes across all age groups. The school’s impressive sports facilities help students to develop their skills – these include a brand-new sports centre, strength and conditioning suite, gymnasium, all-weather hockey pitches, cricket ground, indoor and outdoor tennis courts, football pitches, two floodlit AstroTurf pitches, netball courts, squash courts, and a 25m indoor swimming pool. This year, Repton has even welcomed an Australian Olympic swimming coach as the school’s new Director of Swimming. Other Repton sports coaches include England’s first-choice wicket keeper and former captain of Nottingham CCC, Chris Read, as the Director of Cricket; Martin Jones, who has won over 100 England caps, as the Director of Hockey; and Ian Clarkson, former professional footballer, as the Master in Charge of Football at Repton Prep.

Oundle School is a highly sought-after co-educational boarding and day school in Northamptonshire, which welcomes students of 36 nationalities from around the world. The school’s historical buildings date back as far as the 17th century and are dispersed throughout the charming market town of Oundle. This means that the school’s 1,115 students get to study in various locations in the middle of town, instead of in one set locale. Each of these buildings is easily accessible, and the town is less than an hour from London on the train.

Renowned for its unrivalled approach to science and engineering education, Oundle’s SciTec vision blends science, technology, engineering, and mathematics in physical and philosophical studies. The Imperial College and Swansea University have supported Oundle School through this scheme, which sets the benchmark for STEM education in the UK. The most esteemed of experts have provided lectures and webinars for the school, including Professor Robert Winston, who led a science webinar last month. Aside from its science and engineering focus, Oundle offers 28 A Level subjects, 26 iGCSE/GCSE subjects, and over 40 academic societies. Boarders also enjoy varied weekend programmes – each designed to motivate and enthuse students.

Oundle encourages students of all sporting abilities to participate in physical education classes and societies. The school has 270 teams and boasts 1,500 individual sports achievements. Oundle also values opportunity across each of the Arts, encouraging students to take part in musical and theatre performances, as well as art exhibitions.

Uppingham School is a co-educational, independent boarding school in the pastoral county of Rutland. Founded in 1584, the school owns various historical and modern buildings, many of which sit amid the main quadrangle. Here, students can visit the chapel, Victorian schoolhouse, school tower, colonnade, and Western Quad. The Western Quad is home to a £40m science, art, sports, and theatre campus, which holds an industry-standard proscenium arch theatre, black-box drama studio, 25m swimming pool, 62-station fitness suite, three squash courts, two dance studios, a gymnasium, 12 tennis courts, and a six-court sports hall. The Western Quad has been shortlisted for the Architecture Stirling Award.

Students at Uppingham have extensive choice when it comes to choosing their GCSE and A Level options, and many Uppingham students go on to study medicine, dentistry, and veterinary science, amongst other subjects, both at prestigious UK universities and internationally. Aside from its vast range of academic subjects, Uppingham’s enrichment programme enables students to partake in creative arts, volunteering, and fundraising projects. Uppingham is particularly well-known for the standard of its music education, with musicians such as Paul David and Robert Sterndale Bennett having attended the school.

Also based in Rutland, Oakham School is the first ever secondary school to have gone co-educational and made the transition all the way back in 1971. Since then, the boarding school has developed a cohesive portfolio of academic and vocational subjects to inspire its boarders and day-students as they work towards their GCSEs, IB Diplomas, and A Levels. The school welcomes students age 10-18 and prepares them for higher education at prestigious universities around the world.

Outside of academia, Oakham also offers an array of extracurricular classes. While musical students take to the stage in Edinburgh Festival plays, concerts, and House theatre productions, more than 100 students made it to the national finals in over 10 different sports last year – thanks to intense coaching from the school’s sporting staff and access to outstanding practice facilities. Oakham School also has a variety of overseas partnerships with international schools, enabling exchanges for students to widen their cultural knowledge and improve their modern foreign languages.

Based in rural Shrewsbury on the Welsh border, Shrewsbury School is a thriving, co-educational boarding and day school. Students enjoy learning on the historical campus, which sits amid 110 acres of beautiful land on the banks of the River Severn. Shrewsbury School offers a broad spectrum of traditional subjects, as well as its Academic Extension Programme, which enables students to pursue subjects relating to current affairs. Students enjoy taking their studies in the school’s impressive facilities, including a library that dates back to 1916 – providing an authentic setting for the school’s 40,000 print books – and Shrewsbury House, the school’s youth and community centre. Every year, Shrewsbury School’s sixth formers dedicate a couple of days to running events for young people in the centre. Groups of students also spend weekends at the Shrewsbury House to foster strong relationships and develop their team-building skills.

Rugby School is an independent boarding school for students aged 13–18. Founded in 1567, the school began as a free grammar school. Today, Rugby School is one of the oldest schools in the UK. Over the years, the school has developed a coaching-driven focus, and Rugby students consistently achieve high grades in their GCSES, IB exams, and A Levels – the best across schools in Warwickshire. Students also have the option to study the Extended Project Qualification, which was originally developed at Rugby.

As the birthplace of Rugby football, the school also provides unrivalled football coaching, amongst other sports. Plus, the school’s ‘Sport Scholars’ are always on hand to coach the school’s teams and support students through sports scholarships. Rugby School also offers annual international trips, termly musical events, and socials, encouraging students to develop strong friendships, performance skills, and confidence. BBC Radio 4 even live-broadcasted a musical performance from the school choir last year. In particular, the school is widely recognised for its annual Arts Festival, which attracts huge numbers of students, parents, and community members every year. This year, Rugby School has been shortlisted for the TES Boarding School of the Year Award and the Independent Schools of the Year Award.

These six schools are a great place to start when picking out the right school for your child. From Repton’s historical buildings, dazzling curriculum, and Olympic-quality sports coaching to Oundle’s SciTec vision and Shrewsbury’s award-winning educational and community efforts, each school has its own unique offering.