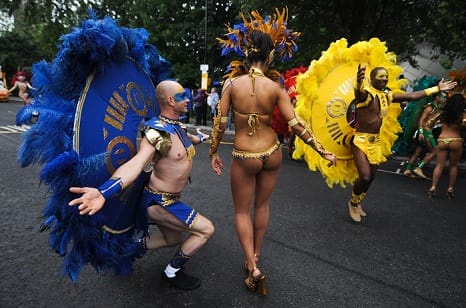 In pictures: Notting Hill Carnival – including THAT police dance-off

Relive the colour, the comedy and the incredible crack that was carnival

Europe’s biggest street party took place on Sunday 25 and Monday 26 August around Notting Hill, Ladbroke Grove, Westbourne Park and the surrounding areas, and it was as big, bouncing and beautiful as ever.

Notting Hill Carnival has been taking place since 1966. This weekend it attracted hundreds of thousands of party-goers to dance the weekend away to more than 40 static sound systems.

Despite making almost 280 arrests at this year’s Carnival (a drop from last year), many of the police present were in high spirits. There were 6,000 officers on duty on Sunday and 7,000 present on the Bank Holiday Monday.

In fact, three officers present seemed to be enjoying themselves just as much as the revellers when they took place in a dance-off that has so far attracted more than 230,000 views on YouTube:

The Carnival bands start their procession at around 9am both mornings, and sound systems wind down around 7pm in the evening.

More than 40,000 volunteers get involved in Notting Hill Carnival, from the stellar and stylish dancers through to guides handing out maps and directing people around the 20 miles of road it takes place along.

All kind of colourful costumes come out to play, with dance troupes, samba groups and flotillas creating costumes that have often taken them the best part of the past year to design and create.

After all, it’s not that often you can get away with wearing a spangly thong while walking down the streets of West London.

Brown’s beer: Get you livers ready for a month of back-to-back beer festivals