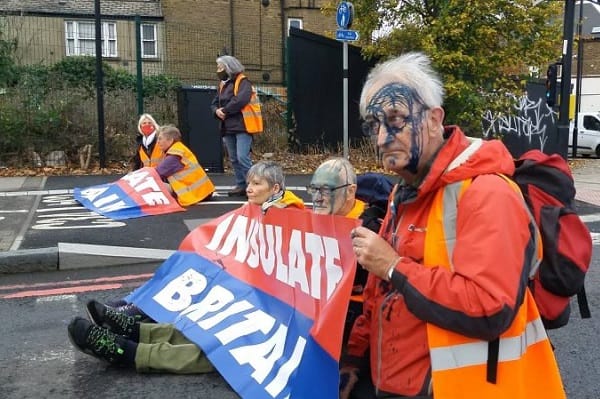 Insulate Britain have been exposed as hypocrites as the eco mob are using superglue which is toxic to the environment.

The protestors are using superglue on their feet, hands and even one has used it on his face to glue themselves to the tarmac.

The Sun has revealed that superglue is made from a mixture of extremely dangerous chemicals which is harmful to the environment.

When superglue is used it emits a large dose of toxic greenhouse gasses into the air and is not recyclable.

Rachel Watkins who is a green expert and appeared on the 2007 Dragon’s Den programme and won an investment from Peter Jones and Theo Paphetis as she has years of experience in making environmentally friendly packaging.

Watkins told the Sun, “The main problem with superglue is the actual process when it’s made.

“In the first stage of reaction to making it, toxic chemicals are by-products, one of them is cyanide.”

Watkins added, “It just really is not a nice chemical. You’ve only got to look at the back of any superglue and it’s got a great big b***dy hazard warning on it.

“It’s a hazardous material. What impact do protestors think that’s going to have on the environment and wildlife?”

She continued, “But it’s not just the by-product, it’s the greenhouse gasses emitted in the production of it.”

Watkins who owns eco-packaging company Tinybox said, “It’s like most things where you know it’s not environmentally friendly, the data is kept so private.”

She said, “The fact activists are using superglue, it’s just not an ideal scenario.”

“One of the main problems with solvent-based adhesives is that they are bad for the environment.

“They can adversely affect the ecosystem and human health in numerous ways,” according to Sure Tack Systems.