Home Business Insights & Advice How to build alongside bats in London 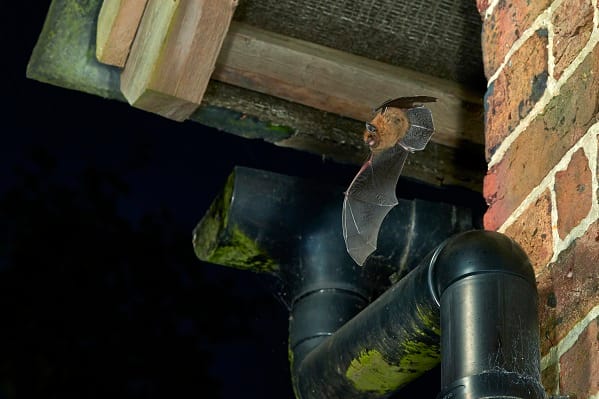 How to build alongside bats in London

With a new WWF report revealing the stark news that wild animal populations around the world have fallen by a staggering 69% since the 1970s, it is clearer than ever that we need to find sustainable ways to co-exist with our wildlife.

London alone is home to more than 14,000 species of flora and fauna, from swans and stag beetles, to hedgehogs, falcons, foxes, and deer. While, for the most part, these wild creatures live amicably alongside their fellow human city-dwellers, sometimes wildlife and people can come into conflict.

Often, this is caused by property development – whether that involves erecting new buildings or renovating historic properties. Perhaps a parcel of land has been earmarked for development, but it provides a welcome sanctuary for a population of hazel dormice or great crested newts. Or perhaps you have recently purchased a large Victorian house and wish to renovate and extend it, but there is a population of bats roosting under the eaves.

It is because of these situations that any application for planning permission requires the carrying out of an ecology survey, to determine whether or not any wildlife will be threatened by the development. In cases where the planning is given the go-ahead, the developers will need to demonstrate in detail how they will go about ensuring the impact on the animals will be as minimal as possible.

What does an ecology survey involve?

If you are in need of an ecology survey but have never had one before, you may be wondering what it entails.

The first step will be to order a Phase 1 Habitat Survey, which will be carried out by a licensed ecologist and is designed to determine whether or not a development can go ahead or if any additional surveys may need to be carried out.

Once the preliminary survey has been carried out, the ecologist will provide a detailed report that will include information such as what value your proposed site has, in terms of nature conservation; GIS mapping of any wildlife habitats found on the site; recommendations for mitigation; and what impact any potential development could have on the species currently living there.

If any protected species are found, a separate survey will need to be carried out.

Which are the most high-risk species?

There are several protected species that it is possible to find in London, even in the seemingly most unlikely parts of the city. These species include badgers, newts, reptiles, and bats.

If a protected species is found on the land where you are hoping to carry out building work, the action – or lack thereof – that you can take will depend on the species. For example, if you find a badger sett on the property, you cannot create any disturbance within 30 metres of the sett, in order to protect their habitat.

One of the most common protected species you may find in London are bats.

When it comes to building alongside bats, the limitations regarding planning permission can be less restrictive, depending on the situation. However, you have to be prepared to expend time and money to make sure any bat roosts on your land are kept well-protected and the bats are not disturbed.  There are 18 indigenous species of bat found across the UK – and it is a criminal offence to obstruct access to their roost, or destroy it, as well as to intentionally kill or harm a bat.

If you are hoping to develop a London site and the preliminary ecology survey indicates the presence of a roost – perhaps in a property you are planning to renovate, or in a tree that stands where you are hoping to build – it will be time to arrange a closer investigation.

There are a few different bat surveys that can be carried out by companies such as Arbtech, with the goal of assessing the presence of a population of bats. The first is called a Preliminary Roost Assessment, which may then lead on to a Bat Emergence and Re-Entry Survey and potentially a Hibernation Roost Survey.

A Preliminary Roost Survey will determine whether or not a population of bats is present, searching for evidence such as droppings or left-over prey. It will also take into account any potential roosting areas they could use and will give them a grading, from low to high.

If any evidence of bats is discovered, or if any potential roosting sites are found, then you will have to provide mitigation information or propose alternative ‘habitat gains’ for the bats.

Can I still get planning permission if bats are found?

If bats are discovered on the site that you want to develop, or in the old property that you want to do up, it doesn’t necessarily mean that you have to abandon your proposed project. If you can find a way to proceed that doesn’t involve disturbing or harming the bats, you may still be able to get a license to continue.

For example, you may be able to carry out your construction or renovation work at a certain time of year and you could avoid using certain materials or chemicals that could prove harmful to the bats. You could also propose to limit the amount of lighting that you will be using during your project. Best of all, if you can guarantee the protection of the bats’ access points – or create alternative entryways for them to use – this will make it more likely that your work will be approved.

To be on the safe side, you may wish to use the services of a bat expert to guide you during your building work and make sure you stay on the right side of the law. So long as all the right mitigation and precautions are put into place to keep the bats safe and undisturbed, there is no reason why your London construction project cannot co-exist alongside their chosen roosting site.