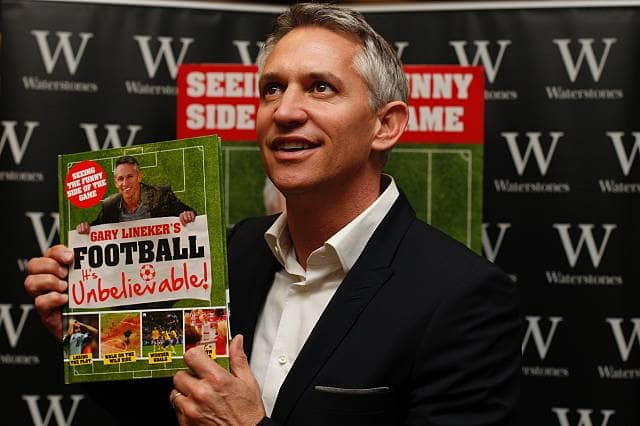 Gary Lineker has been voted the nation’s favourite sporting TV pundit, beating Wimbledon favourites Claire Balding and Sue Barker to the top spot. In a survey of 2,000 people carried out by subscription free satellite TV provider Freesat, 35% named the Match of the Day presenter among their favourite three sports personalities, while Wimbledon presenters Claire Balding and Sue Barker tied in second place with 18% voting for both of them.

Another Wimbledon fan favourite, John McEnroe, was next on the list with 15% of respondents putting the tennis legend among their top three pundits, while following closely behind in joint fifth place were Sky Sports football pundit and former Man Utd player, Gary Neville, and BBC and ITV presenter Gabby Logan, both on 14%.

In addition to having the most popular TV pundits, Wimbledon was also voted the most anticipated sporting event of the summer in the same Freesat study. When asked which summer events they were most looking forward to, two in five (42%) put the Championships in their top three list, giving it almost twice as many votes as the second placed British Grand Prix, and the third placed World Athletics Championships. All three of the most-anticipated events are being televised on free-to-air channels.

Who are the nation’s favourite TV pundits?

Freesat spokesperson Guy Southam said: “It’s unsurprising that the most popular pundits are those who appear on free channels as this is where people tend to watch most of their sport, even those who have expensive sports TV subscriptions.

“Last year, of the 250 sporting programmes most watched by Sky TV viewers, every single one was aired on free channels, with Euro 2016, The Olympics, The Rugby Six Nations and Wimbledon dominating the list. Last year, many of these customers would have been paying £49.50 for access to a Sky sports bundle.”