Home Business NewsBusinessAviation Frustrated BA passengers take to Twitter, but what are your legal rights? 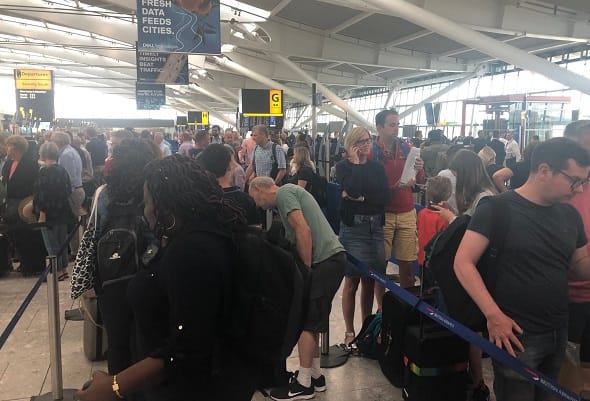 Frustrated BA passengers take to Twitter, but what are your legal rights?

Some 18,000 passengers have been affected by Wednesday’s IT meltdown and holidaymakers arriving at Terminal 5, Heathrow are being urged to go home as the message boards are saying “short haul check in is closed.”

This is the line for customer service at @British_Airways at LHR. What a nightmare. @CBS12 pic.twitter.com/HVAGYu8ooX

A BA spokesman said, “We are very sorry to our customers for the disruption to their travel plans.

“We are working as quickly as possible to resolve a systems issue which has resulted in some short-haul cancellations and delays from London airports.”

He added, “A number of flights continue to operate but we are advising customers to check ba.com for the latest flight information before coming to the airport.

The airline is required to give food/drink or vouchers for such in case of delays beyond a certain amount of time. Passengers at Vienna airport can’t find any BA staff to help.

David Hewson said on Twitter, “Major computer failure with British Airways at Gatwick this morning. This is the queue for the queue at check in. Currently stuck on ground cos pilot can’t get data. Set off early if you have a flight.”

Major computer failure with British Airways at Gatwick this morning. This is the queue for the queue at check in. Currently stuck on ground cos pilot can't get data. Set off early if you have a flight pic.twitter.com/hL37TGRJ70

A passenger stuck on a plane for 2 hours said, “Apparently mass disruption at @British_Airways, computer outage and all flights grounded or so were told on the BA1321, sat on this aircraft for 2 hours.”

One passenger posted, “IT meltdown [again]. Sat on tarmac at LHW, already missed my connection screwing up months of planning and wasted £’000s.

“When I do arrive, I will have to just fly home again. BA is a complete catastrophe & I will never fly with them again.”

@British_Airways Flight cancelled when checking in, IT problems apparently. Very busy to rebook. Not ideal with a 1 year old… pic.twitter.com/WQLgoNfwWH

A passenger stuck on a plane in Bologna, Italy wrote on Twitter, “@British_Airways what’s occurring with your system software? No information and no time for departure?”

@British_Airways what’s occurring with your system software? No information and no time for departure?? #Delays #Italy pic.twitter.com/alIRQryUXU

@British_Airways Hi, en route to our wedding and still stuck on Newcastle Tarmac. We connect at Heathrow to Venice. Any updates would be greatly appreciated!

Passengers have also accused BA of not communicating with passengers affected accurately. A person said on Twitter, “You do realise that BA.com provides no information whatsoever, and all my bookings have vanished.

“This is a complete shambles, and you are doing nothing to keep people informed accurately.”

If you are an affected passenger and you don’t know your rights then read on.