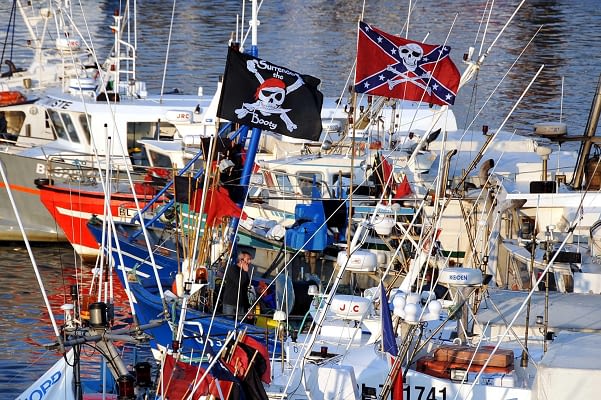 French fishermen have launched direct action as they have blocked the Channel Tunnel in Calais and also blocked a British cargo vessel from docking in Brittany.

The French fishermen are protesting as the are blaming London and Jersey for witholding licences to fish in British waters.

The fisherman’s committee chairman Gerard Romiti accused the British authorities attitude of being “provocative” and “humiliating.”

He said, “We don’t want handouts, we just want our licences back.

“The UK must respect the post-Brexit deal. Too many fishermen are still in the dark.”

A Downing Street spokesman said, “We are disappointed by threats of protest activity.

“It is obviously a matter for the French to ensure that there are no illegal actions and that trade is not affected but we continue to monitor the situation closely. ”

He added: “We continue to abide by the TCA and work with fishermen if they have any further evidence they wish to submit as part of their application.

“We will continue to give licences where that evidence can be met.”

She said, “I think we should take a very tough line and say, okay, if this is the way you’re going to be, we will reduce the number of licences because of the way your men are behaving.

“That would mean they could not legally fish in our waters, which would severely impact their income, and I would imagine therefore they would be putting pressure on their government.”