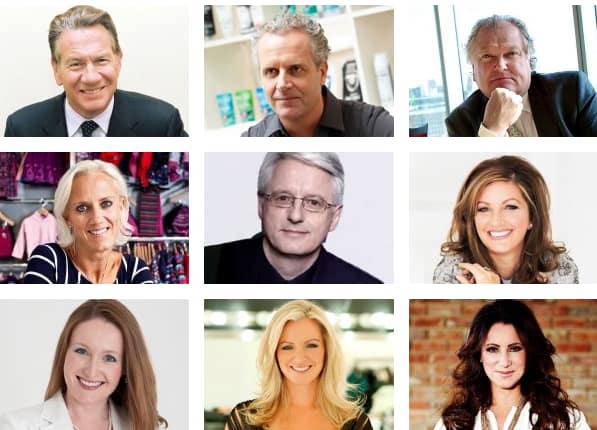 On 10 and 11 April at the The Old Truman Brewery, Shoreditch

“How can I become the next Branson or Dyson?”

That’s the question every entrepreneur wants an answer to.

To crack the code of growing a business, attend the Elite Business National Conference and Exhibition on 10 and 11 April at the The Old Truman Brewery, Shoreditch.

Hear from business superstars including Karren Brady CBE and Lord Digby Jones on how to build and scale a successful business.

Karren Brady is vice chairman of West Ham Football Club, Lord Sugar’s advisor on The Apprentice and one of the UK’s leading female business speakers. Karren was appointed vice chairman of West Ham United FC in January 2010 and under her stewardship, the club was named as the preferred bidder for the Olympic Stadium. It also recorded a trading profit for the first time in many years during her first year at the club.

Michael Portillo entered politics young and briefed Margaret Thatcher for her press conferences during the 1979 general election that brought her to office. He became an MP in 1984 at a by-election caused by the Brighton bombing of the Conservative Party conference. Michael was a minister for 11 years, during five of which he was in John Major’s cabinet, ending as Secretary of State for Defence. He has become a broadcaster, now best known for five series of Great British Railway Journeys on BBC 2; and for appearing on almost every This Week programme (a sardonic late night political chat show) since its inception in 2003.

Known to millions as chief executive of Ann Summers and Knickerbox, Jacqueline Gold is renowned for managing a company run by and in support of women. Her business is a true multi-channel retailer, with gross annual sales turnover of over £150m, 143 UK & Ireland stores, 7,000 party planners (holding over 4,000 parties every week). Jacqueline has received many accolades for her achievements. These include Retail Week’s Most Powerful Woman in Business and Barclays Bank’s Most Inspirational Businesswoman in the UK, as well as numerous others from prestigious publications.

Michelle Mone is the CEO of MJM International and creator of Ultimo, one of the UK’s leading designer lingerie brands. Listed as one of the top three female entrepreneurs in the UK and honoured by the Queen with an OBE for her contribution to business, Michelle has built a hugely successful career on an incredibly simple concept: helping women look and feel their very best. Since launching MJM, Michelle has established herself as one of Scotland’s biggest exports. In 2000 Michelle won the World Young Business Achiever Award before being named Business Woman of the Year at the Corporate Elite Awards in London.

After university, Lord Jones joined the Royal Navy followed by several years in a law firm working his way up to senior partner. He then joined KPMG as vice chairman of corporate finance, acting as a close advisor to many public companies across the United Kingdom and in KPMG’s global markets.In 2000 he joined the CBI and was director-general for six and a half years. In 2005 he was knighted for his services to business and became Sir Digby Jones in the Queen’s New Years Honours List.

From 2007 to 2008 he served as the minister of state for trade & investment, accepting a lifetime peerage in the House of Lords where he now sits on the cross benches and is known as Digby, Lord Jones of Birmingham.

He changed the way that UK Trade & Investment (UKTI) was perceived by delivering a record year for inward investment and expanding the UK’s presence in all of the major international markets. Following his departure from ministerial office he was appointed as a business ambassador for UKTI until March 2013.

Will King, founder, King of Shaves

The King of Shaves brand was created by Will King in the depths of the UK recession in the early 1990s.

Following redundancy, Will decided to build his own business, King of Shaves, and his first product was shaving oil, which solved his personal problem with shaving – razor burn. It wasn’t long before he was filling thousands of small plastic bottles in the kitchen of his home, and then his big break came when he landed a deal for Harrods to stock his product in September 1993, followed by Boots in May 1994.

Fast forward 18 years and today over 30 different King of Shaves brand products, including the iconic wet shave system razor, the Azor, are stocked in all major outlets across the UK as well as being available in the USA, Australia, New Zealand, Japan, South Africa and Brazil.

Founded in Newport, south Wales, in 1993 JoJo Maman Bébé employs 570 people and is turning over £44m with its products sold in well over 50 countries. Laura juggles her business commitments with caring for her own kids and supporting Nema, a charity she helped found in Mozambique which supports community health projects and builds schools. Laura has won numerous awards throughout her career and regular appears in the national press and on television.

Mike is a serially successful entrepreneur, a Mail on Sunday columnist and best-selling business author. He established himself in the 80’s when he co-founded “The Instruction Set” and exited, selling his business to Hoskyns (now Cap Gemini Ernst & Young).  In the 90’s he worked with many different start-ups, three of which went broke and two of which later went Public.

Clare Rayner is one of the most well-known and respected retail experts in the UK, championing the success and sustainability of smaller, independent retailers as well as retail suppliers. As a child born into a family of retailers and entrepreneurs, you could almost say that retail and business are in Clare’s blood.

Topics to be discussed: