Home Brexit France detains British boat over post-Brexit fishing row, saying this is ‘not war but this is a combat’ 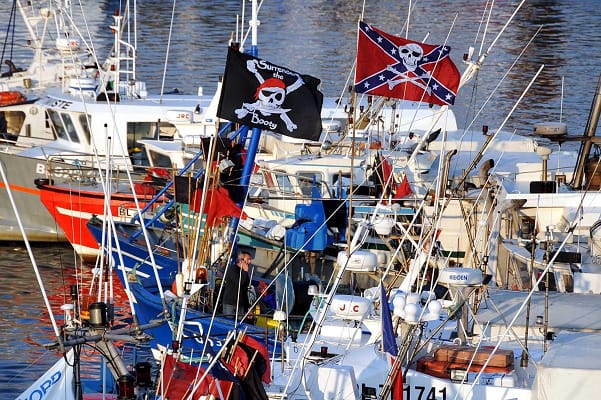 France detains British boat over post-Brexit fishing row, saying this is ‘not war but this is a combat’

As the fishing row intensifies France has detained a British trawler for not having a licence to fish in their waters, the French authorities have confirmed.

In a tweet the the French Maritime Ministry said, “This Wednesday, two English ships were fined during classic checks off Le Havre.

“The first did not comply spontaneously: verbalisation.

“The second did not have a licence to fish in our waters: diverted to the quay and handed over to the judicial authority.”

The British government have called the incident “disappointing and disproportionate” which could breach international law.

The French maritime minister Annick Girardin said it is “not war but this is a combat.”

France has issued a warning that they could ban British fishing boats to disembark at French ports from next week if the fishing row is not resolved.

Clement Beaune, France’s Europe minister, said on CNews TV, “So now, we need to speak the language of strength since that seems to be the only thing this British government understands.”

Barrie Deas, from the National Federation of Fishermen’s Organisations, who represent English fishermen said this is “very concerning.”

He said, “It may be normal enforcement action but against the background of the threatening noises coming from the French government… it’s very concerning.

“France seems determined to escalate this issue about licences and I suppose we have to wonder why.

“There’s a presidential election coming up in France and all the signs are that the rhetoric has been ramped up ahead of that on the fishing issue.”

Deas added, “(The amount of) UK vessels landing into French ports is not massive.

“It’s a bit strange because the French fleets fish much more in UK waters than we fish in their waters.

“Therefore if we descend into a tit for tat relationship, I think the French fleet are very much more exposed – I don’t think that’s a very helpful way to go.”

A Government spokesperson said, “France’s threats are disappointing and disproportionate, and not what we would expect from a close ally and partner.

“The measures being threatened do not appear to be compatible with the trade and cooperation agreement (TCA) and wider international law, and, if carried through, will be met with an appropriate and calibrated response.

“We will be relaying our concerns to the EU Commission and French government.”