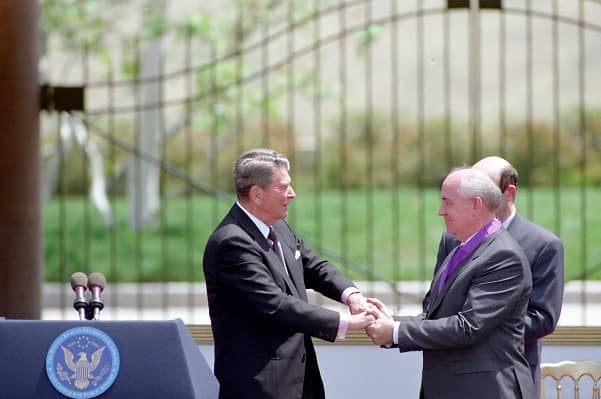 The former Soviet leader Mikhail Gorbachev has died aged 91, know for leading Russia through a period of complex and dramatic change during the cold war.

Gorbachev who was one of the most revered figures of the 20th Century died on Tuesday after a long illness and was undergoing treatment at the Central Clinical Hospital in Moscow.

Without any bloodshed Gorbachev ended the Cold War, however he was unable to stop the break up of the Soviet Union which ended in 1991.

Gorbachev was also an outspoken critic of Vladimir Putin and last month we reported that he was very “upset” that Vladimir Putin has “destroyed” his “life’s work” and is said to be “upset” with the war in Ukraine.

Alexei Venediktov, a Russian journalist who was in touch with Gorbachev said the former Soviet President has accused Putin of destroying his “life’s work.”

Gorbachev was responsible for establishing good relations with the West, who brought in new “reforms” but he failed economically.

In an interview with Russian Forbes, Venediktov, editor of independent Ekho Moscow Radio, said, “Gorbachev’s reforms – political, not economic – were all destroyed.

“He deeply understood that reforms were necessary, he strove to offer his own solutions to urgent problems.”

A Kremlin spokesman described Gorbachev as a “unique person… who will always remain in the history of our country,” but they added that his “romanticism” about the West was not justified.

Labour leader Sir Keir Starmer said Gorbachev was “one of the great figures” of last century and he will be “forever be remembered.”

In a tweet, he said, “One of the great figures of the 20th century, Mikhail Gorbachev’s pursuit of reform forged a path for diplomacy over conflict.

“He will forever be remembered as the last leader of the Soviet Union who had the courage and conviction to end the Cold War.”

The Prime Minister Boris Johnson said, “Mikhail Gorbachev is one of those people who changed the world and unquestionably changed it for the better.

“When you look at what he did to make Europe whole, free, to give freedom to the countries of the former Soviet Union – it was quite an extraordinary thing.

“And of course Mikhail Gorbachev is one of those people who triggered a change, a series of changes, that perhaps he didn’t anticipate.

“Maybe he paid his own political price for it, but when history is written, he will be, I think, one of the authors of fantastic change for the better in the world.

“And what I worry about today is that the current leadership in Moscow is intent on undoing the good of Mikhail Gorbachev, and is intent on a revanchist attempt, a revenge-driven attempt, to recreate that Soviet empire, and you’re seeing that in Ukraine – that’s the tragedy, something that Mikhail Gorbachev would have thought was absolutely unthinkable, unwarranted.”