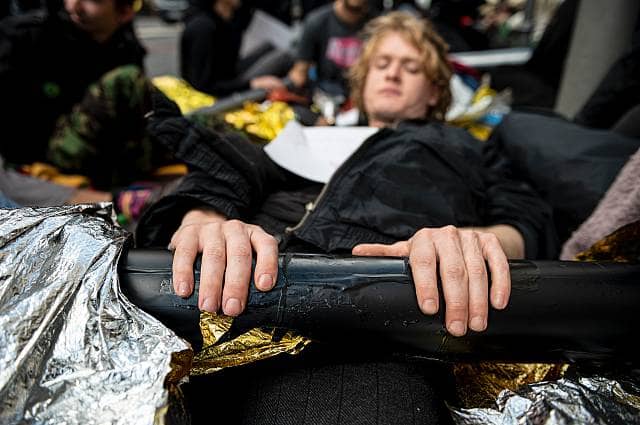 Extinction Rebellion (XR) activists have been ordered by the police to stop protesting in London with immediate effect or face arrest.

The MEP said, “We were given notice just a short time ago that this square is no longer allowable for peaceful democratic protest.

“The rules have been changed. No longer is any space in London allowable for peaceful democratic protest.

“There is no justification for this curtailment of the democratic right to protest for the future of our children.”

In a democracy we have a right to peaceful protest

The Metropolitan Police said they had made 1,445 arrests by 2pm on Monday.

Deputy Assistant Commissioner Laurence Taylor said on Monday evening, “We have made significant progress in managing XR’s activity at sites across central London over this past week.

“Today, protesters targeted areas in the City of London, causing further disruption to people and businesses in London’s financial district. Police made more than 90 arrests.

“The policing operation continues, and we will continue to take action against anyone engaged in unlawful protests at locations targeted by Extinction Rebellion.”

In response to the police banning XR for protesting the group said in a statement, “Police are clearing peaceful protest in Trafalgar & Vauxhall. They are back-tracking on promises made &, MEPs say, in contravention of UK law, in the national square.

“This is an emergency, and an outrage. The police must respect the law. This is a democracy.”