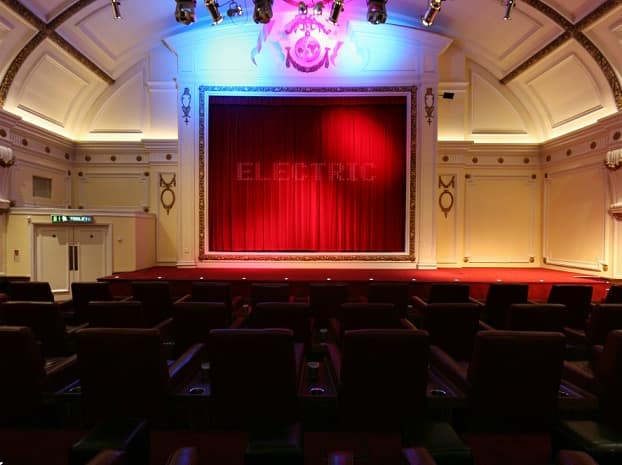 All the serious cinema-goers we know in London (ourselves included) have a soft spot for the Electric Cinema on Portobello Road. Founded in 1910 (it claims to be London’s oldest), it’s set in a beautiful old hall (see above), lined with plush red leather seats and resplendent with tasty drinks bar and menu. The cool factor is thanks to its Soho House ownership (founder Nick Jones refurbished it in 2001), but it’s cleverly stayed on the right side of cool and is much more about nostalgia and proper silver screen-going than aching trend-setting.

So we were gutted when it was hit by a fire on Saturday due to a blaze that started in the restaurant kitchen around 2:30am. Up to 60 firefighters and 12 fire engines fought the fire.

The Electric was forced to close and has removed all its film listings from its website.

@electriccinema tweeted yesterday evening: “Thanks for the tweets of support. Hoping to reopen by week’s end. Screenings on Mon, Tues & Weds have been cancelled as we assess the damage.”

According to the Evening Standard, no major damage was done, and Jones told the paper that: “Thankfully no-one was hurt and I’m confident with our dedicated team we’ll be back to business as usual very soon.”

Film fan? Check out these blockbusters…

The 10 most expensive movie flops of all time

The Debate: Will Netflix knock out Lovefilm?