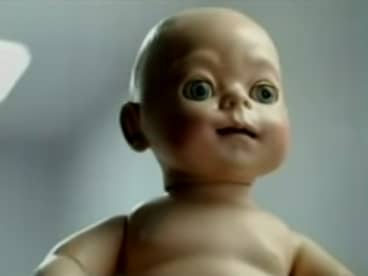 Every good head of marketing knows that the best way to get people to buy more stuff is to absolutely terrify them.

It’s those subliminal links you build between feelings of abject terror and, say, your delicious new ice cream, those artfully forged new neural pathways between the parts of the brain that handle computer games and the cranial regions that control desperate screaming horror, that are really going to shift more units.

So why not give a nice open brief to your ad agency that says: “Just scare the living sh*t out of them.”

All of which is perfectly evidenced by these eight terrifying ads.

Mmmm… ice cream…. I can’t wait to go out and buy a tub of this tasty treat… no, stop, you’re making me sooooo hungry… really…

This spooky snippet for, um, Dulux

Every clued-up home-owner knows that you need a certain collection of items to keep yourself safe from ghouls and monsters. Wooden stakes and garlic? Check. Salt circle? Check. Dulux Repel? Er, check.

The ghost girl Phones4U ad, the most complained-about advert of 2011

Phones4U did a whole string of spooky ads before meeting its own horrid end, but this was the scariest – a Halloween special that provoked more than 650 complaints to the Advertising Standards Authority.

This ad for caffeine drink K-Fee was viewed more than a million times online after going viral, back when “going viral” was still a thing.

The slogan at the end translates as: “You’ve never been so awake.” Quite.

Back in 1999, we weren’t used to seeing sophisticated CGI. So when this girl hit our TV screens, looking alien-like, it freaked everyone out. Of course, no one should have been shocked by someone with an unusually shaped head – but they were. Watch for yourself to see why.

And this horrific PS3 ad, featuring a nasty baby doll

Continuing its tradition of outright disturbing creative, here’s Playstation again with this completely horrid ad. Would this really make you want to buy a PS3?

This Tango advert, deemed too scary for children

This ad was banned from kids’ TV for being too frightening. As an adult, I can vouch that it’s pretty unnerving for us too. But Tango has never been a brand to shy away from provocative ads, as our columnist Steve Henry can tell you – he created some of their most iconic ones.

This slasher flick for Nike

Culminating in probably some of the best frank copywriting ever, which, if you don’t exercise enough, is even more terrifying than the advert.

Five great adverts that admit their products are rubbish