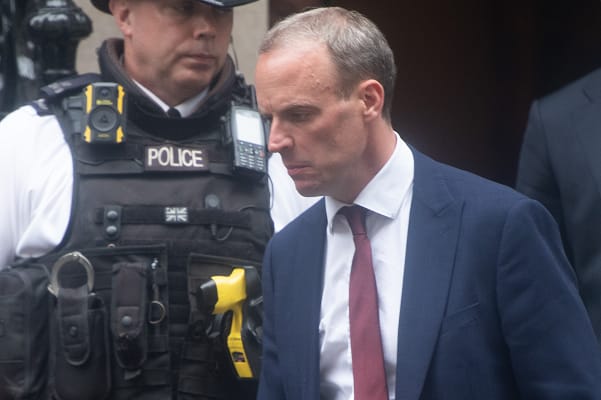 The Deputy Prime Minister, Dominic Raab has been accused of sexism on Wednesday in the House of Commons after he gave Labour MP Angela Rayner a wink during Prime Minister’s Questions.

The senior Conservative MP has been hit with much criticism for making the “patronising”gesture to the senior female Labout MP.

Raab accused Rayner of “champagne socialism” as she was at the opera when the Rail Maritime and Transport Union were on strike.

This was in response to Rayner quoting Raab’s view that those who use food banks “have a cahs flow problem.”

Rayner added, “He doesn’t. He spent over a million pounds in nine months on private jets, it shows how out of touch this Government is.

“At this rate, by 2030 a million more people will be using food banks. How many more working people will be pushed into poverty by his Prime Minister before he says enough is enough?”

Raab said, “If the Labour Party, if she wants to help working people, they should be clear in standing up against these militant, reckless strikes.”

He added, “She talks about working people. Where was she when the comrades were on the picket line last Thursday?

“Where was she when the Labour frontbench were joining them rather than standing up for the public?

“She was at the Glyndebourne music festival sipping champagne, listening to opera. Champagne socialism is back in the Labour Party.”

Rayner asked Raab, well, “Where was the honourable member when (during) the situation in Afghanistan?

“On a sun lounger, that’s where. I’ll take no lectures from the honourable member when it comes to doing your job.”

She added, for the record, “An exceptional record on stagnant wages, rising poverty and broken promises, and the Prime Minister wants to drag this out until 2030, and how much more can he stomach before finds the guts, how many more tax rises, how many more families (driven) into poverty and how many manifesto pledges broken.”

Raab replied, “I can’t help thinking (she) is auditioning for the leadership contest on that side, not really referring to anything on this side.

“We’re the ones supporting Ukraine with sanctions on Russia, with military support.”