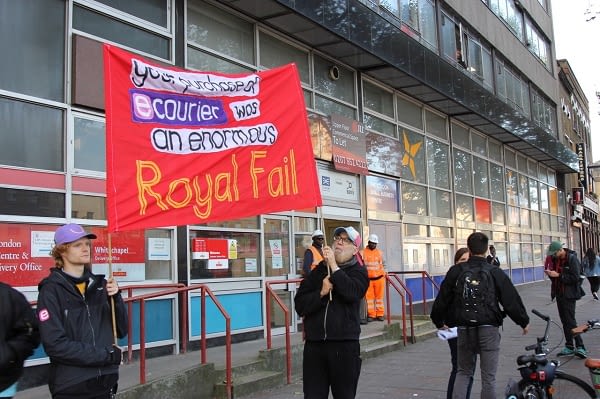 Over 50 couriers and other supportive trade unionists assembled this morning outside the headquarters of Royal Mail subsidiary eCourier in Whitechapel , London, demanding basic rights including recognition as workers, pay at London Living Wage plus costs, and the recognition of the IWGB for collective bargaining.

At the rally in support of the strike scheduled for today and tomorrow, there were chants of ‘shame on you’ and placards with the couriers’ demands, speeches were given by a number of union members including Max Dewhurst, Vice-President of the IWGB, and Mike Hutchinson, a courier and union rep who was sacked yesterday by the company shortly after publishing an article on the eCourier’s exploitative practices on Left Foot Forward.

Ken Loach, the director of ‘Sorry We Missed You’, a film about the plight of gig economy drivers that will be released in the UK on the 1 November, gave his support in a speech over the phone.

The strike, and picket line, will continue tomorrow.

Ken Loach said, “I absolutely salute your courage and bravery in taking this organisation on. It’s very important that you win and mark a fight back against this dreadful process of taking security away from people at work and replacing it with anxiety, stress, no secure wage and all the responsibility landing on your shoulders and not on the employers.

“The reality is that you are employed by the company and your contract should give security that allows you to pay the bills and know the wage that’s coming in. The whole issue of privatisation means that companies get the job by cutting labour costs – and how do they do that? By making people work harder for less money. I hope that Labour will stand with you.”

IWGB Vice President and eCourier pushbike courier Max Dewhurst said, “We deserve basic employment rights because, as Ecourier knows from when they settled the Flanore case in 2017, couriers at Ecourier are classed as limb (b) workers and therefore should have auto enrolment into pensions, paid annual leave, protection from discrimination and trade union rights. These are basic things that are being denied to the majority of the eCourier fleet, and we’re demanding justice for the whole fleet.”

“It costs a lot of money to work at Ecourier. It’s thousands and thousands of pounds a year. It’s not a joke, and it’s an insult to the injury of already being denied employment rights in the first place. That’s why a lot of people have had to go to work today, because they are simply in in-work poverty. It’s time that eCourier paid the real cost of their labour, and stopped getting it so cheap.”

“It’s a privilege to represent the couriers today, and it’s a shame that we’ve had to force the company to deal with this issue.”

Victimised c ourier and union rep  Mike Hutchinson said, “It’s just not right, the way these people try and treat a workforce. They’ll even call it a workforce when you’re sitting in their office with them, but they’re not prepared to admit that it is a workforce when it comes to the legalities of that. Seems a little odd to me. It’s Dickensian practices, they’re trying to grind people down and it’s just not right. We’re human beings, we’ve got rights.”