Home London News Can London get vertical high-speed trains that can go up skyscrapers? 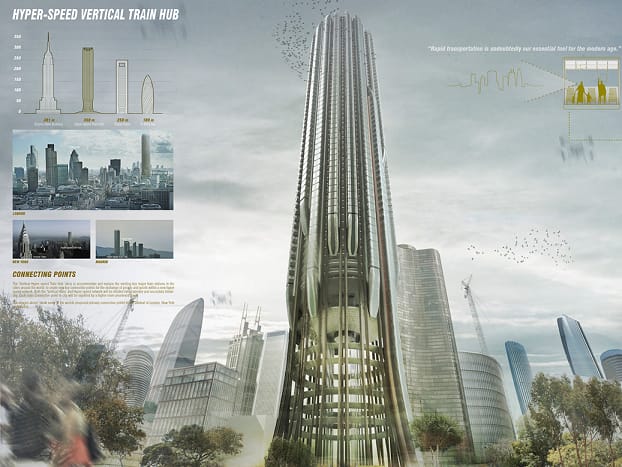 Can London get vertical high-speed trains that can go up skyscrapers?

No, this is no April fools’ joke.

Londoners Christopher Christophi and Lucas Mazarrasa have drawn up proposals for the world’s first vertical trains that can climb up skyscrapers.

The futuristic project aims to replace stations with giant skyscrapers to reduce the amount of land used by traditional train stations. Named the Hyper Speed Vertical Train Hub, it would also help free up space in city centres.

Magnets on the side of the building would allow the trains to go up the building and train carriages will pivot like a Ferris wheel when they approach.

The duo said: “The Hyper Speed Vertical Train Hub, aims to resolve the inevitable challenges that cities will face by 2075, and offers a deliverable and sustainable solution for the future of the transport generation.

“The trains will also create a dynamic and kinetic facade, one that will be continuously evolving and responsive to the workings of the vertical hub, a language that can be read by the whole city,” the team say.

The competition has been entered into eVolo magazine’s annual skyscraper competition.

The London Octopus: is this London’s most controversial building ever?