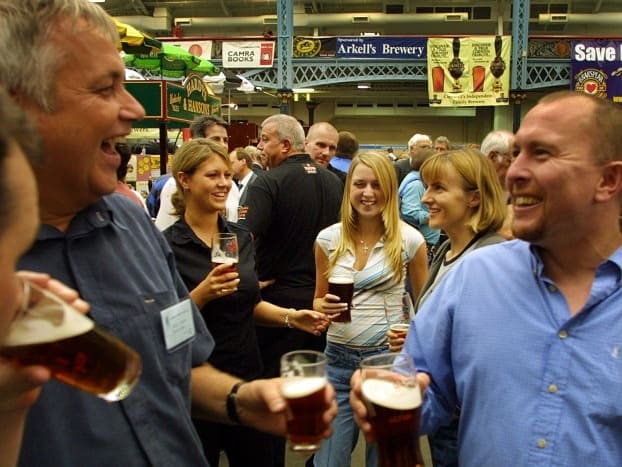 Brown's beer: All you need to know about London's biggest celebration of beer

This time last year I wrote about the big beast of beerfests, the Great British Beer Festival (GBBF), held in London every August. It bills itself as ‘the World’s Biggest Pub’, attracting around 55,000 people every year to drink over 900 real ales. In 2013 it was joined by the inaugural London Craft Beer Festival – a rival, perhaps, showcasing the younger, hipper, East London side of Britain’s Beer revolution in contrast to the stalwart traditionalism of the Campaign for Real Ale (CAMRA) event.

A whole 12 months ago, this choice of two rival London beer festival in the same week was enough to generate a good few megabytes of digital coverage. This year, the whole size and shape of the game just changed dramatically.

From the 9th to the 16th August, London becomes London Beer City. As well as the return of GBBF and the London Craft Beer Festival, pubs and brewers all across town will be holding a week of special events to celebrate London’s beer renaissance.

The sheer range of different attractions in such a concentrated blast is astonishing. There are 24 different events listed on the website for Saturday 9th alone. These range from brewery open days, where you can see how beer is made and sometimes even participate in live brewing sessions, adding your own ideas to the recipe, to tap takeovers in craft beer pubs, to beer talks and beer walks, to beer schools, beer and food matching sessions, beer versus coffee sessions, beer and music matching sessions, to showcases of rare beers. All that, and a couple of big beer festivals too: London has never seen a celebration of beer on this scale before.

Other cities have seen something similar. Norwich has run its own ‘City of Beer’ celebration for the last few years, celebrating a city that once had no real ale at all, but now has enough good pubs and local breweries to allow it to credibly claim to be Britain’s First City of Beer.

London, of course, hates to be trumped in any competition, but in beer it has until recently been a shamefully poor contender. Contrary to popular belief around the bars of Dalston, London didn’t invent craft beer. In fact, it was pretty much last to the party. As well as Norwich, provincial cities such as Derby, Sheffield and Nottingham were enjoying thriving craft beer scenes back in 2006, when the closure of Young’s in Wandsworth meant London, a city of seven million people had just two breweries it could claim as its own. For a capital city with such a big ego, it was embarrassing.

So when craft beer finally exploded here, it went hammer and tongs to make up for lost time. From two breweries in 2006, it seemed amazing when we had about a dozen by the end of 2010. Now the London Brewer’s Alliance believe there are as many as seventy brewers and brewpubs in operation or about to open their doors in the capital.

London Beer City brings together these new brewers, old favourites, classic pubs and new craft beer bars in an inclusive celebration. It’s the brainchild of Will Hawkes, beer journalist and current reigning Beer Writer of the Year. “I’d been to similar events in Philadelphia and Melbourne,” he told me. “I went to Philly for the original Beer Week at the end of May. It’s been running for eight years and it’s a really impressive festival of beer. The city buzzes with interesting beer events and – this is the key, I think – it’s a lot of fun. I thought we could do something similar over here. I want to create a week that focuses attention on beer, that reminds the wider public that we have one of the world’s richest, most interesting beer cultures. Most beer drunk in the UK is made in the UK – it’s our national drink.”

With the right contacts, and with the enthusiasm currently fermenting around beer, talking the idea around a few people made it become reality within a matter of weeks. “The response from London’s breweries and pubs has been overwhelmingly positive,” says Will. “Pretty much all of the best pubs and bars were keen to be involved – I’ve been really pleased with how creative they’ve been in terms of the events they’re running. I don’t think any beer lover will feel short-changed by the London Beer City programme.”

Long ago, London was the world capital of beer. Two of the world’s greatest ever beer styles – IPA and Porter – evolved on its streets. Its biggest breweries – now all long gone – were once household names, brands recognised around the world, so famous that visiting heads of state would drop by to see the mash tun in action. In a city that’s constantly being rebuilt and rewritten, you have to look hard to find many signs of London’s beer heritage.

London Beer City is the next step in reclaiming that lost crown of the greatest beery city on earth. And this is only the beginning. “A few people have said to me: there are so many events!” says Will. “My response is: you haven’t seen anything yet. If this year goes well, next year will be on a whole different level.”

Pitch up and pitch in with a unique beer brewed on-site in BrewDog’s newest London opening.

CAMRA’s gargantuan annual real ale bash has its faults and its critics but has improved massively in recent years.

Styles and Flavours – a sensory session

The best craft beers from the UK, Europe and the US. Ironic facial hair not required.

Meet brewers from Hammerton, The Kernel, Sambrook’s and Windsor & Eton as they match their beers with four different courses and talk about beer and food matching.