Home London News BREAKING: Driver arrested for driving “at high speed” in Antwerp at a crowd 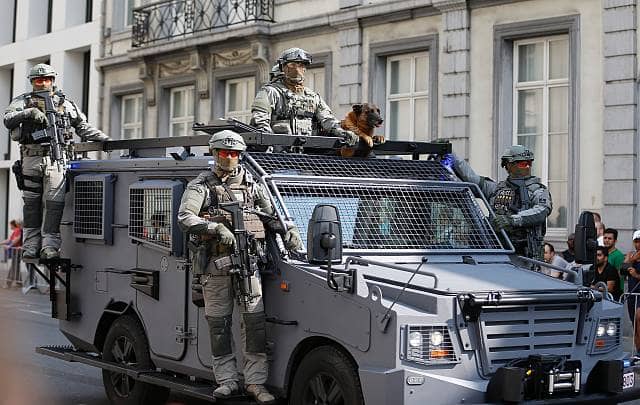 BREAKING: Driver arrested for driving “at high speed” in Antwerp at a crowd

A man has been arrested in Antwerp, Belgium. Police have said the driver was arrested under the suspicion of driving at a crowd of people.

The federal prosecutor’s office in a statement said: “Different arms were found in the boot, bladed weapons, a riot gun and a container of liquid that is still unidentified.

“The suspect is Mohamed R., born on May 8, 1977, of French nationality and a resident of France.”

In a televised news conference in Antwerp a police spokesman said: a man in camouflage was taken away”

He added that the vehicle was French and was driven in Antwerp’s main shopping area in the Meir at “high speed.”

Police chief Serge Muyters Said: The suspect is of North African descent, was taken away.

He added: “extra police and military personnel has been deployed to the city centre.”

Francois Hollande, French President said: “It seemed to involve a French national, with possibly a certain number of weapons in his boot – it’s up to the judges to make a statement on that – who was looking to kill or at the very least create a dramatic incident.

“Therefore, we must continue to be on high alert and mobilise all our forces.”

There are no reported injuries and security has increased in the Belgian city.

Yesterday was the anniversary of the twin bomb attacks in Brussels where 32 people were killed in a terrorist attack.

This comes a day after four people were killed and over 40 were injured in a terror attack in London. The attacker drove his hired 4×4 vehicle at high speed on Westminster Bridge’s pavement directly in to pedestrians, he then stabbed and killed PC Keith Palmer who was on duty protecting Parliament.