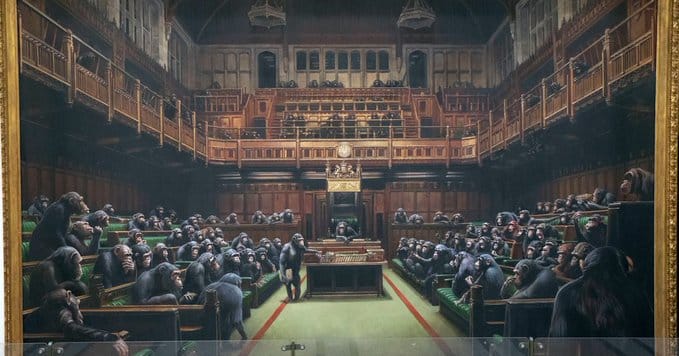 Banksy painting depicting MPs as Chimpanzees to go under the hammer

A Banksy painting depicting MPs as Chimpanzees in the House of Commons called, Devolved Parliament is to go on display at Sotheby’s for this first time.

The painting which stands at 13ft is to be on display from 28 September until 3 October and could fetch as much as £1.5 to £2m. Devolved Parliament was painted in 2009 and is somewhat timely given the current political chaos.

Alec Branczik, European head of contemporary art at Sotheby’s said, “Regardless of where you sit in the Brexit debate, there’s no doubt that this work is more pertinent now than it has ever been, capturing unprecedented levels of political chaos and confirming Banksy as the satirical polemicist of our time.”

In 2009, Banksy famously said of Devolved Parliament, “You paint 100 chimpanzees and they still call you a guerrilla artist.”