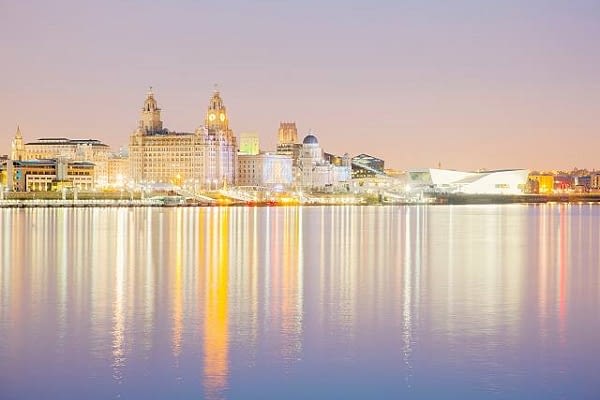 The experts at Aspen Woolf look at why Liverpool is attracting property investors with an eye for strong returns, booming opportunities and exciting developments.

City of the Beatles, the Mersey and a famously proud and loyal community, Liverpool is a truly iconic British city. In 2019, it’s thriving with job opportunities, regeneration developments and cultural hotspots. And there are big plans for its future.

Liverpool is up there among the best property investment opportunities in the country. It boasts an average rental yield of roughly 5.05%, which is much higher than traditional property hotspots. London, for example, is hovering at a rental yield of around 3.05%.

And in a survey by GoCompare on the best UK cities for landlords, Liverpool shines with the highest average rental yields in the country. The national average stands at roughly 3.6%, and not only does Liverpool power well past this, but the city also has an average rental price growth of 2.65%.

The job market, city centre regeneration and the huge student population are all key drivers for Liverpool’s ongoing success. While the city suffered a certain amount of decline during the late 1970s and throughout the 1980s, over the last couple of decades it’s undergone a huge transformation and regeneration. And there is more on the way.

Past projects include the revitalisation of the Albert Dock area, with its restaurants, high-end retail outlets and the world-renowned Tate Liverpool museum and art gallery. This waterside area was once derelict, depressing and demotivating, but in the 1990s it was transformed into an urban centre worthy of any European tourist city.

The site extends for more than 2km along the River Mersey and is redeveloping the historically important docklands to create a mixed-use city centre waterfront quarter. Costing £5 billion, the project will create more than 315,000 sq metres of high-quality office space and 53,000 sq m of conference and hospitality facilities. There will also be a new terminal for cruise liners and many other leisure and retail facilities.

Liverpool was selected as a key development site due to the major growth the city has experienced in its visitor economy. Today, this supports more than 51,000 jobs and is worth more than £4 billion to the economy.

Just over 7 million people live within a commutable distance with the centre of Liverpool, and the city has increased its economic output by 39% since 2009. Added to this, the city is well served by two airports. These link it to every major European city in a journey time of around four hours.

A major drive to link the innovative and progressive industries in Liverpool with the South East lies in developing the Knowledge Quarter Liverpool (KQ Liverpool). This collaboration between key partners across the city region is boosting the dynamic industries in Liverpool and is home to some of the most influential names in health and technology, culture and education, and science. More than £1 billion of new developments are currently underway as part of KQ Liverpool, centred on Paddington Village.

Liverpool is a culturally rich city with much to offer

Liverpool itself has a current population of 494,800 according to the latest authority figures, with a wider region population of 1,551,400. Property investors should consider the city as well as other boroughs such as the Wirral, Sefton and Knowsley.

In 2008 Liverpool was named European Capital of Culture and that boost continues to make it a visible destination city. Tourism in Liverpool is increasing year on year, with the latest figures from the Office of National Statistics showing 839,000 foreign visitors in 2017. This increased from 671,000 in 2016, and since Liverpool is now the fourth most visited city in the country.

Culturally rich, Liverpool is also a major retail city that includes the enormous Liverpool One complex.

Home to a massive student population of around 50,000 thanks to the University of Liverpool and Liverpool John Moores University, the demand for accommodation is high. The Liverpool Echo estimates that there are approximately 34,000 students needing Liverpool based accommodation at any one time. Most student property developments are in areas such as Allerton, Childwall, Wavertree and Edge Hill, but there are also city-centre developments that increasingly offer the kind of accommodation that suits many demographics.

For example, Vincent House is a luxury 62-bed development right in the heart of central Liverpool. Positioned in the city-centre among all the amenities, and just a short stroll from Liverpool Lime Street, Vincent House affords easy access to the major universities too. This kind of forward-thinking, modern urban accommodation is transforming the city centre. Crucially, it is also serving a changing demographic, and encouraging young professionals to live and work in this thriving city.

Investors have yet more good news in that Liverpool is one of the cheapest major cities in the country for property. According to Hometrack the average house price in Liverpool stands at £125,400, which represents a 5.8% increase on last year. Additionally, house prices are rising fast, with a report from the Guardian stating that Liverpool is one of the best cities over the last three years for price growth.

Low property prices along with city-centre rental values means Liverpool also scores highly for yield values. For example, Totally Money says that six Liverpool postcodes make it into its Top 25 Best Buy-to-Let areas in the country. L7, which covers the city centre and the popular student areas of Fairfield and Kensington, ranks the highest, with average yields of 9.79%

Letting agency Portico Host says that landlords with long-term investments in Fairfield could reach up to 12.52% in terms of rental yields. And for those happy to deal in very short-term lets such as Airbnb, yields of a whopping 30.68% could be in the offing.

Liverpool’s transformation is set to continue until at least 2033 according to the Liverpool Local Plan. There is an active pipeline of regeneration projects worth £14 billion, and the investment opportunities are many and varied.

Now is the time for property investors to snap up new developments, as Liverpool maintains its high yields and affordable prices.