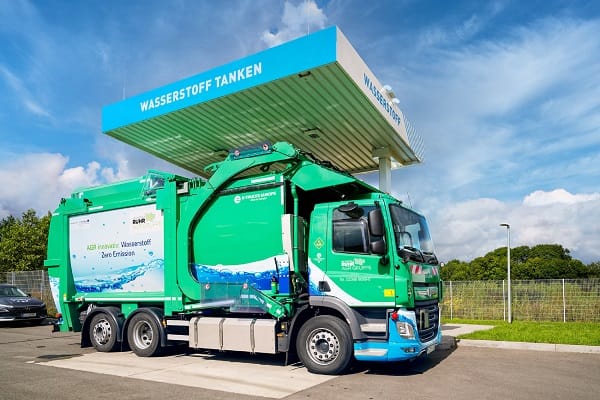 The aim of the project, which involves seven European trials in total, is to investigate how hydrogen-fuelled trucks can be an effective solution in reducing emissions in refuse vehicles.

In February 2022 and also under the HECTOR initiative, Aberdeen City Council unveiled the UK’s first refuse collection vehicle (RCV) – a Mercedes-Benz Econic with a 250 kW Hyzon electric motor coupled to an Allison 3000 Series™ transmission in conjunction with a 45 kW fuel cell.

Before the demo vehicle – a DAF CF 340 front loader with a Millennium XXL 40 body from Terberg HS – could be used to collect commercial waste, a conversion from standard diesel propulsion to hydrogen was required. This was carried out by E-Trucks Europe, a specialist manufacturer of hydrogen-electric commercial vehicles based in Belgium, in collaboration with Wietholt, a DAF authorised dealer in Dorsten, Germany. Wietholt is also a service partner of Allison Transmission.

In order to convert the diesel truck to hydrogen propulsion, the vehicle had to be completely gutted. Almost the entire original powertrain – the engine, fuel tanks and exhaust system – was removed from the DAF truck. Only the Allison 3200™ fully automatic transmission was retained as an integral part of the drive concept.

The Allison 3200 fully automatic 6-speed transmission, already developed for use in refuse collection vehicles in addition to other applications, was optimised by application engineers from Allison and E-Trucks Europe to meet the requirements of the DAF fuel cell truck.

A fuel cell module was installed in the former engine compartment of the vehicle. The diesel tanks were dismantled and replaced with battery packs that power an electric motor coupled to the Allison transmission with hydrogen energy. The four hydrogen tanks on the roof of the vehicle have a capacity of 20 kgs, enough for a range of around 200 kms (around 124 miles). Refuelling at 350 bar takes just under 15 minutes.

The 28 ton front loader, 6 x 2 with steered trailing axle, is operated by one person to collect commercial waste from companies in the Ruhr Metropolis region. In addition to the new hydrogen-powered refuse collection vehicle, 15 hydrogen cars are already in use at AGR.

The procurement of further climate-friendly trucks with hydrogen engines is planned. AGR is currently planning to build its own hydrogen production facility and high-performance filling station, which will be suitable for both municipal H2 refuse vehicles and private H2 cars.

“This particular kind of propulsion is ideal for use in the waste disposal sector due to its climate protection potential. And it once again demonstrates that Allison transmissions can be used with all types of fuel,” said Stephan Marker, Area Sales Manager at Allison Transmission. “Allison Automatics are known for their pairings with diesel engines. Yet they are equally well-suited to alternative-fuel and alternative-power vehicles.”