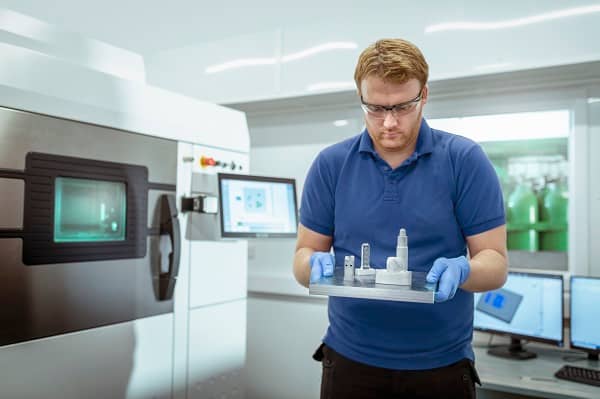 What is 3D printing commonly used for?

3D printing has become a household term these days, it has many applications ranging from hobbies to manufacturing. The following are the most common ways in which 3D printing is used.

Product designers are always seeking ways to make their manufacturing processes more efficient, especially in terms of cost and production time. The demand for quick prototyping technologies increases as a result. Utilising 3D printing technology for the design and production of a physical model is known as rapid prototyping. This additive manufacturing technology is quick and convenient for time-to-market deliveries. High-fidelity prototypes are the actual manufactured physical component. Accordingly, when compared, the prototype and the final product do not have many differences. The majority of industries prefer 3D printing for proof of concept even though many alternative technologies, including casting and CNC machining, are known to be applicable for the rapid prototyping of designs. A prototype should be understood at this point to be a tool, not a goal in and of itself. Prototypes are iterated upon until a completely engineered part is finally produced. 3D printing technology uses different approaches such as Stereolithography (SLA), Selective Laser Sintering (SLS), Fused Deposition Modeling (FDM), Selective Laser Melting (SLM), and Laminated Object Manufacturing (LOM)

Although 3D printing offers a practical substitute for the human cadavers now employed in medical education and training. A huge advancement in medical education would be made if the human anatomy could be accurately reproduced using 3D printing technology from high-resolution CT imaging and other sources, including several copies in different sizes. Students could learn more effectively and develop into better carers by using 3D design tools to construct virtual models that imitate body activities. Surgical planning is the process of learning the anatomy and physiology of challenging organs or anatomical structures before a procedure. Surgeons could practice difficult surgical procedures using virtual 3D models. Additionally, 3D-printed models could be used by surgeons to practice procedures and try out various strategies before performing the actual surgery. The simulations might help patients comprehend their conditions and what to anticipate during surgery. Using 3D-printed models for surgical planning can speed up procedures or operations while also enhancing clinical results and patient satisfaction. Medical device suppliers can evaluate materials, size, shape, and function by creating a preclinical prototype. The accuracy of 3D printing enables speedy testing and early feedback, allowing for the optimisation of final product design.

Making automotive parts with 3D printing is good since it may speed up the production process. The capacity to prototype extremely particular, intricate parts and models means that 3D printing can play a more precise role in the construction of cars in addition to accelerating mass production. Racers have an advantage since they can modify their vehicles so that every part is optimised for better performance. It has even been utilised in Formula One motor racing to design parts for test models to examine how well they operate under a number of various scenarios.

There are numerous applications for 3D printing in the aviation sector. An important 3D printing production milestone is demonstrated by the example below: For its LEAP aviation engines, GE Aviation has 3D printed 30,000 Cobalt-chrome fuel nozzles. They reached that milestone in October 2018, and given that they create 600 pieces every week on 40 3D printers, the number is probably considerably higher now. One 3D printed component that weighs 25% less and is five times stronger than twenty separate parts that had to previously be welded together was created. Due to its high degree of efficiency, the LEAP engine is the most popular engine in the aerospace sector, and GE saves $3 million per aircraft by 3D printing the fuel nozzles, so this single 3D printed component results in a financial gain of hundreds of millions of dollars. The Boeing 787 Dreamliner includes GE fuel nozzles, but there are other 3D-printed components as well. A business named Norsk Titanium uses 3D printing to create the 33-centimeter-long structural fittings that secure the aft kitchen galley to the airframe. In contrast to cheaper metals where the costs of material waste are easier to absorb, Norsk chose to specialise in titanium because it has a very high strength-to-weight ratio and is relatively expensive. As a result, the reduction in waste made possible by 3D printing has a greater financial impact. The Norsk Merke 4 employs a plasma arc to melt a metal wire in a process called Rapid Plasma Deposition (a type of Directed Energy Deposition), which can deposit up to 10kg of titanium per hour, as opposed to sintering metal powder with a laser-like most metal 3D printers. A 2 kg titanium part would typically need a 30 kg titanium block to be machined from, producing 28 kg of waste, whereas a  3D printed version of the same part only needs 6 kg of titanium wire.

Buildings can be printed. A 3D model maker like SelfCAD can be used to create your designs and even 3D print. Commercially available 3D-printed homes are already available. Some businesses fabricate pieces in advance, while others manufacture it on-site. The majority of accounts about concrete printing center on large-scale systems with relatively large nozzles for a high flow rate. It works well for consistently laying down concrete layers quickly. But for incredibly delicate concrete work that fully utilises 3D printing’s capabilities, something a little more nimble and with a finer touch is required.

Adidas’ 4D line features a midsole that is entirely 3D printed and is made in enormous quantities. Back then, we published a piece describing how Adidas planned to sell 100,000 pairs of AM-infused sneakers by 2018 despite originally releasing just 5,000 pairs to the public. It appears that they have achieved or are close to achieving that objective with their most recent variants of the shoe. Local Adidas shops and different online third-party retailers sell the shoes all around the world.

By 2028, it is expected that the market for 3D-printed eyeglasses would be worth $3.4 billion. The category of end-use frames is one that is rapidly expanding. Considering how simple it is to include an individual’s dimensions in the finished product, 3D printing is an especially good production technique for eyewear frames. Since traditional glass lenses are cut from a considerably larger block of material called a blank, roughly 80% of it is wasted, they don’t begin out thin and light. Considering the number of individuals who wear glasses and how frequently they need to buy new ones, 80% of those figures represent a significant waste. Additionally, in order to accommodate their customers’ needs for customised vision, labs must maintain substantial supplies of blanks. Finally, the unique, high-quality ophthalmic lenses that 3D printing technology can now produce are available, eliminating the waste and inventory expenses of the past. The Luxexcel VisionEngine 3D printer prints two pairs of lenses per hour without any polishing or other post-processing using a UV-curable acrylate monomer. Additionally, the focal points may be fully adjusted so that a particular region of the lens can offer superior clarity at a distance while another region of the lens can offer better vision up close.

Recent headlines frequently mention implants made via 3D printing. These situations are frequently experimental, which can give the impression that 3D printing is still an emerging technology in the medical and healthcare fields, but that is no longer the case. More than 100,000 hip replacements have been 3D printed by GE Additive over the past ten years. Trabecular Titanium, the material used to create the Delta-TT Cup created by Dr. Guido Grappiolo and LimaCorporate, has a regular, three-dimensional hexagonal cell structure that mimics the architecture of trabecular bone. The trabecular structure promotes bone ingrowth into the implant, enhancing the biocompatibility of the titanium. Over ten years later, several of the original Delta-TT implants are still functioning well. The hearing aid is another medical device that was successfully 3D printed and manages to blend in. Since the previous 17 years, almost all hearing aids have been 3D printed thanks to a partnership between Materialise and Phonak. Rapid Shell Modeling (RSM) was created by Phonak in 2001. Before RSM, creating a single hearing aid required nine time-consuming procedures that involved hand sculpting and mold creation, and the outcomes were frequently ill-fitting. With RSM, a technician takes an impression of the ear canal using silicone, scans the impression in 3D, and then, after some small adjustments, prints the model in resin using a 3D printer. Following the addition of the electronics, it is supplied to the user. Each year, hundreds of thousands of hearing aids are 3D-printed using this technology.

3D printers are used by educational institutions to create models and tools that function as learning aids. These 3D models help students gain better insight into concepts and enable them to learn faster and in an efficient manner.

Printing miniature 3D models of objects or characters is one of the most common uses of 3D printing. Hobbyists worldwide use this to create models inspired by popular culture.

In conclusion, 3D printing is a technology with profound applications in many fields that are important for life to exist as we know it today. Fields ranging from hobbies and education to aviation utilise 3D printing to their benefit. To reap the benefits of 3D printing you should know 3D design, which you could do in an easy manner using the interactive tutorials on SelfCAD.