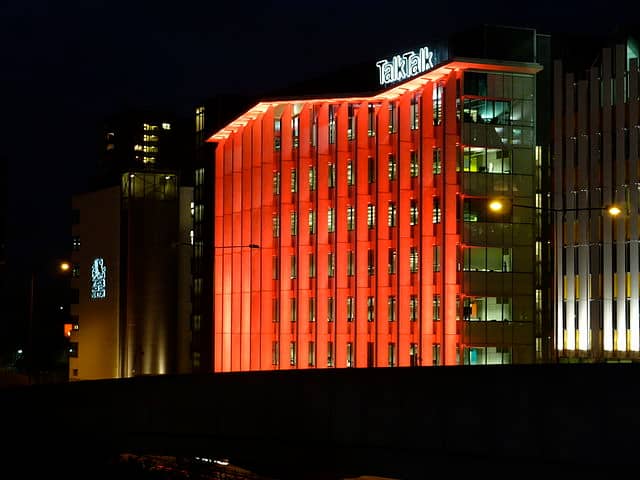 Broadband giant TalkTalk is set to move its headquarters from London to Salford.

It said hundreds of roles would be relocated to its Salford office – where its business and technology teams are already based – in 2019.

TalkTalk said it added 24,000 customers in the second quarter, taking its total customers to 4.2 million.

Tristia Harrison, Chief Executive of TalkTalk, commented: “This has been a strong first half for TalkTalk, with continued broadband base growth and further progress as we become a simpler, more efficient business. Our Fairer Broadband commitment, focus on reliability and unique Fixed Low Price Plans continue to improve customer satisfaction and loyalty, resulting in our lowest ever churn in the second quarter. We remain on track to deliver our plan for the year, with growing Consumer ARPU and increasing revenue leading to strong EBITDA growth.

“With core business performance on track, we are today announcing two additional steps to position TalkTalk for the future. We are accelerating our full fibre strategy, launching a new company, FibreNation, which will expand our Gigabit broadband footprint to over 100,000 homes in the next 12-18 months. As we continue to radically simplify TalkTalk, we will also create a single main campus for the business in Salford. Having a single main home will reduce operational complexity and allow us to become a more efficient, focussed business, in turn supporting our long-term growth.”

Office landlines to be extinct in six years